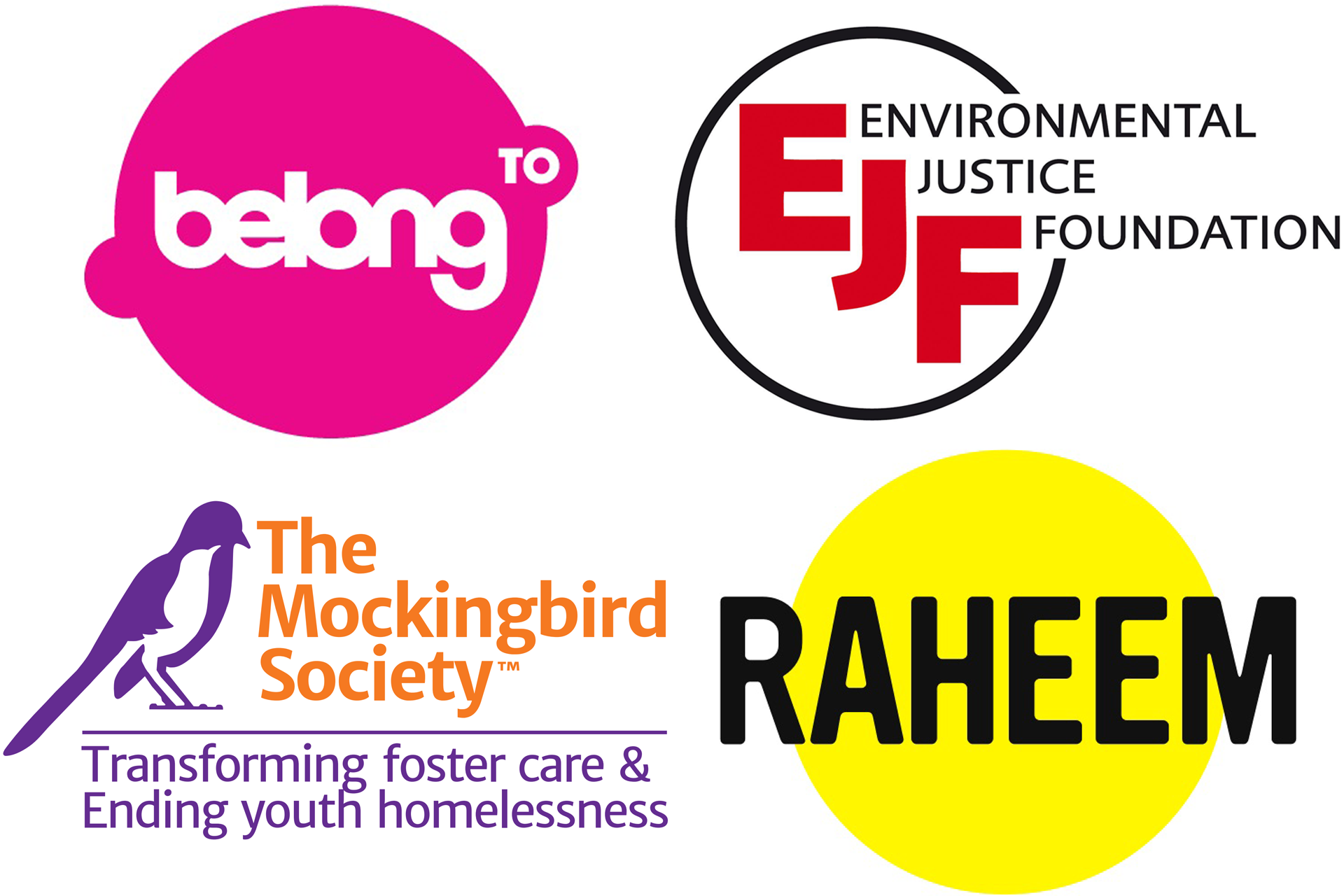 “As a Foundation that’s focused on supporting human rights around the world, there’s no shortage of issue areas to look at,” says Tina Lee, head of social impact at Dropbox. “But given the rise of the Black Lives Matter movement, the climate change crisis, and the marginalization of targeted communities, we committed to these organizations for their missions around racial justice, climate change, and LGBTQ+ rights. There is so much work to be done in these areas and we have a unique opportunity to provide support and make an impact.”

These four new organizations will be joining our existing cohort, which includes Allies Against Slavery, Human Rights Law Centre, and Physicians for Human Rights, who will be funded for another year. Our four inaugural grantees (GOAL, Larkin Street Youth Services, War Child UK, WITNESS) are now alumni partners as we close out their three-year funding grants but we’ll continue with skills-based volunteering support.

Belong To is a LGBTI+ rights organization aiming to create a world where LGBTI+ youth are equal, safe, and valued in the diversity of their identities and experiences. Based in Dublin, and working across Ireland, Belong To advocates and campaigns on behalf of young LGBTI+ people, and offers specialized services with a focus on mental and sexual health, alongside drug and alcohol support.

“We as an organization, at our core, believe that young people can be agents of positive social change,” said Oisin O’Reilly, head of operations and fundraising. “We strive to ensure that the experiences of LGBTI+ young people informs our work. The way we engage with young people and adolescents is a process of equal partnership. This means we encourage young people to think for themselves and work with us to in developing our campaigns and programmes. It’s the young people who are living those experiences who are the experts on their lives.”

O’Reilly says their focus is on changing systems, structures, and attitudes in society. Unfortunately, family rejection, fear of coming out, and homophobic bullying is still a big problem. Belong To provides safe spaces for young people going through these issues. And they continue to lobby government to make policy changes at a higher level.

“As things change and we see more problems arrive at our front door, more people needing help, this grant just gives us the freedom and the ability to support those young people in whatever situation,” said Caroline Flynn, partnerships and engagement manager.

For O’Reilly, he said the grant means “there won't be people who get phone calls unanswered or won't get to talk to someone, or who will be left on their own, so all of those things give us hope.”

Williams has been working in conservation for decades. She’s seen how conservation and human rights organizations have worked in silos, without real collaboration. So when she co-founded EJF with Steve Trent, executive director, in 2000, she wanted to bring human rights and environmental security together. Problems like pollution or drought directly impact local populations and their access to basic human rights such as health and water. “If you don't protect the people who are living in those communities, then you're never going to save their wildlife,” said Williams.

“Rooting our work within the communities at risk and with environmental activists is the foundation of what we do,” said Williams. “We get information from communities on the front line of environmental degradation and take it to really high-level political advocacy groups to leverage change. It's really understanding what is happening on the ground, how people are negatively impacted, and ultimately why human rights are being undermined by environmental degradation.”

“This new partnership is transformational,” said Williams. “It means a huge amount to us. We’re a growing organization so being able to have an unrestricted grant means we’ll be able to respond to new opportunities. It also allows us to benefit from the skills of Dropboxers and build the visibility of what we're trying to do.”

The Mockingbird Society is an advocacy organization in Washington state. Its mission is to transform foster care and end youth homelessness by working in partnership with young people who’ve lived through the systems they seek to transform. Its unique foster care delivery model, Mockingbird FamilyTM, leads to higher retention of foster parents and reduces placement disruptions, which is key to improving the outcomes for children in foster care.

“Having grown up in foster care myself and experienced homelessness, it felt like we were basically objects to be moved around the board,” said Annie Blackledge, executive director. “None of this was about us. And all of us had things to say, things that we knew could be different. We wanted to create change.”

That’s how Blackledge got into this line of work. And it’s also what inspired Jim Theofelis to found The Mockingbird Society in 2000. He saw the need for young people to be a part of this process, to be part of systems change, and to be able to have their voices heard. Theofelis likes to say, “if you don't have a seat at the table, you're probably on the menu.”

Some of The Mockingbird Society’s top priorities for 2021 are legal representation for youth in foster care, advancing equity between tribal and state foster care systems, and ensuring successful transitions to independence for youth aging out of care during the pandemic. They believe that systemic change is the best way to make a difference.

“We want to take a broad view,” said Katherine Bicknell, communications manager. “Rather than continuing to put a bandaid on these wounds, it’s better to heal entirely and make sure youth entering the system later don’t have those same experiences.”

Brandon D. Anderson is a U.S. army veteran, 2019 TED Fellow, and Smithsonian Ingenuity Award Nominee. He lost his life partner to police violence during a routine traffic stop in 2007. Anderson later learned that this police officer had a history of being physically abusive, particularly during traffic stops, but no one had ever reported him.

As Anderson started to do his own research, he found that less than 5% of people report police violence. So in 2017, Anderson started Raheem, an independent service for reporting police conduct in the US.

Based in Oakland but operating nationwide, Raheem’s mission is to change the narrative around policing and end police violence against Black people by making police behavior visible and accountable. Raheem reaches out to people who’ve been recently impacted by police violence and connects them to oversight boards, organizations, and advocacy campaigns that can help them seek justice and accountability. They also use data to identify places with the highest rates of police violence in the country.

“Underreporting police violence produces two monumental consequences,” said Anderson. “One being the difficulty to prosecute the cop or get the person who experienced that violence any justice or healing. And the other consequence is that local policy does not include the voice of or respond to the trauma of people abused by police. This is because city governments use complaints to write new policies that govern their police force, but fewer than 5% of people report police violence.”

Anderson believes that the two biggest problems we’ll have to face is “convincing American governments to no longer leverage police to fundamentally solve their societal conflicts and the understanding by individuals in every city that conflict can be resolved without the use of violence.” Through Raheem’s documentation service, victims can get connected to the resources they need and begin healing. From there, some victims even go on to become advocates for the work.

“When I see organizations like Dropbox sign on to work with Raheem, to me it shows that you’re taking this opportunity to really lean in and say that you believe in our work and that the world we want to see can’t just appear out of thin air, that it requires work,” said Anderson. “So I see this as a commitment to that work and to that vision.”